The glue that holds society together

I looked him square in the eyes to see if he was serious.

“So you think all glue is made from horses?” I replied.

“Yes. When a horse dies it is sent to the glue factory.”

I laughed because I knew it was wrong. But my reaction wasn’t coming from a place of arrogance. It was because I used to think that too.

In kindergarten, I remember being told that glue was made from horses. This blew my mind. I couldn’t look at a bottle of Elmer’s glue the same way ever again.

I was amazed that you poured horse ashes on a piece of construction paper, smushed some macaroni on it, and it stayed put.

The process to make glue looked something like this in my head: 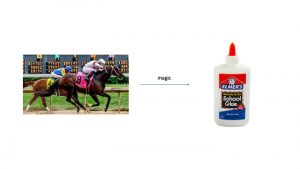 I wholesale accepted that glue origin story with no question.

I would happily pontificate on the subject whenever it would come up in conversation. Even when no one asked me.

Then came the night that my world came unglued…

There I sat three pages deep on a Wikipedia article about the synthetic glue making process and all I could think was how embarrassed I was that I didn’t know.

No one thought to tell me until well after college that we haven’t made glue out of horses since Rosie the Riveter made the last bottle in 1951?[1]

It felt like being the last kid to find out that your image of Santa Claus was nothing more than an invention of the Coca Cola company.

It was one of those moments where you say to yourself “definitely keeping this mistake to myself forever.”

But now, here I was a few years later, discovering that I was not alone. As I probed deeper, I found out that a surprisingly large number of people mentioned horses as one of the leading candidates for making glue.

What I thought was an unforgivable mistake that could only be attributed to my idiocy, ends up being a funny example of how removed we are from how goods are actually made.

The factory as a black box

Modern life is largely abstracted away from the manufacturing of physical goods. A surprisingly small number of people know how anything is made. More people can tell you who Trump’s personal lawyer is than can accurately explain where glue comes from.

You might be saying to yourself “that is not that absurd, Trump’s lawyer is more involved in my life than glue. I have not interacted with glue since I was in kindergarten.”

But here is the thing, yes you have. You interact with glue every day.

Absurd statistic to drive that point home: It is estimated that about 40 lb of glue per year is used for every person in America.

Furniture, plumbing, shoes, books, buildings, and automobiles all use glue in some way, shape, or form. Even the components in your electronics are glued together.

Glue is omnipresent in our lives, but we have a non-zero portion of the population that believes ALL of this is sourced from horses.

Do you have any idea how many horses that would be?![2]

Listen. Little Johnny in kindergarten lied to you. It is time you learned the truth about glue.

I am going to tell you why you thought glue came from horses, how glue is made today, and whimsically reflect on our poor understanding of how things are made.

How we used to make glue

The reason we think glue comes from horses is that we used to make a lot of glue out of horses. It was not just horses, but all animals.

Glue came into being when ancient tribes discovered that the bones, hides, skin, sinew, and other connective tissues from animals could be processed (by boiling/heating) to remove the protein in these tissues (collagen).

Two fun facts about how old glue is:

Through processing, collagen can be made into gelatin that sticks when wet yet hardens when dry (“collagen” comes from the Greek kolla, glue.)

Equipped with this knowledge, my present day self revised my mental model of how to make glue: 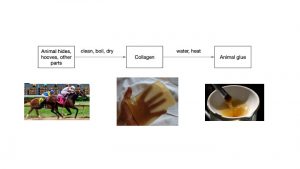 [Deep dive for those interested: detailed blog post about making your own hide glue or if you prefer a video, here is a dude turning deer hide into glue.]

The key ingredient to making glue is collagen. All animals have collagen.

So why did we focus on horses?

Humans get over the whole “every-day-it-is-a-miracle-I-survived” part of our history. All of their basic and psychological needs are being consistently met so people move up to the next level of Maslow’s hierarchy and focus on more self fulfilling activities like furniture making or book binding.

You need a lot of collagen to meet the demands of these self actualizing citizens. But it is the 18th and 19th century, where are we going to get all that collagen?

You guessed it: Horses.

Horses have two important qualities that make them prime candidates for making glue:

Put those two facts together and you end up with ranchers frequently sending their incapacitated horses to glue factories for processing. This is the genesis of the glue story we hear in kindergarten.

Shifting away from horses

With the invention of the car and farming equipment, society’s supply of horses decreased.

This led to a shift to using cattle and pigs instead of horses. The most common source were bone and hide glues made from leftovers of commercial meatpacking (the world’s largest animal glue manufacturer used to be the dairy farm Borden Company.)

To meet the demand for glue, humans made it out of whatever animal was abundantly available.

For example, if we were still using this method for producing glue, the Jersey Shore would be one of the leading glue manufacturing regions. We would send GTL bros to the glue factory after they strain a pec on the bench press. Your cabinets would be held together by DJ Pauly D and Mike the Situation.

Unfortunately, we no longer have the demand for animal glue that we once did. Instead we get to watch the third (3!) season of the Jersey Shore reunion show.

Side note: What happens to horses now? Spoiler alert: it is not great…[3]

Why did we stop using animal glue?

Animal glue is not waterproof, it takes time to prepare, and it smells bad. But more importantly, we had a better alternative.

In the 1930s, advances in the chemical and plastics industries led to the development of a wide range of materials called adhesives and plastic/synthetic resin glues.

Largely speaking, we transitioned away from animal glues to synthetic glues around the 1940s/50s because they are cheap, waterproof, strong, relatively odorless, uniform in quality, and have longer shelf lives.

How is synthetic glue made?

One theory I have as to why the horse myth sticks around is because the process for making synthetic glues is much harder to understand than boiling dead horses.

To make white glues like Elmer’s, ethylene is reacted with oxygen and acetic acid over palladium (to speed up the reaction) to create vinyl acetate monomers (smaller, simpler molecules).

Then the monomers are bonded together to form repeating structural units (polymerized). This polymerization occurs while dispersed in water to form a milky-white fluid (emulsion).

This is how most glue is made today.

Continuing to update the mental model of glue production in my head, I am now left with: 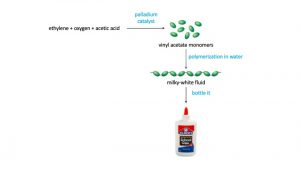 The glue that holds society together

You will notice a distinct lack of horse in my description of how we make glue today. We have not used animal glues since the 1950s, but 50-70 years later, the story lives on.

I believe that stories like this live on in American society due to how disconnected we are from how physical goods are made.

This disconnection grows with every generation.

In some ways, this has been positive for our society. Abstracting away the manufacturing of physical goods from our everyday concerns has allowed us to make incredible progress in some areas. You can read this post from your phone and you never had to worry about sourcing the sand for the microchips to make it. You simply show up to the store and trade money for it.

This frees up your mind to focus on what you uniquely can do like write America’s next award winning novel or post a cute pic on your Insta. All of this is enabled by manufacturing. In a way, manufacturing is the glue that holds society together.

However, I question if this disconnection from manufacturing is all positive. With the exception of computing, we have massive stagnation in manufacturing heavy sectors like energy and transportation. In today’s world, in the words of Peter Thiel, “we’ve built the Star Trek computer, but we don’t have anything else from the Star Trek universe.”

What if the stagnation we see in the world of physical goods is a symptom of the workforce shifting away from manufacturing?

It is hard to have high hopes for advances in something complicated like commercial space travel when we have such a large portion of the population that does not understand the more basic older technology.

Manufacturing is the glue that holds society together. But in areas like transportation, it is old, smelly animal glue that desperately needs to be upgraded. Who is going to step in and innovate when we don’t even know how to adhere the cloth to the seats of the flying car?

I am not saying we should run down to the truck plant and start drilling on tires, but I am saying maybe we should stop and ask “I wonder how they make that?” a bit more frequently. We are the only ones who can build the future and that starts with understanding the past.

This author hasn't written their bio yet.
krapp has contributed 13 entries to our website, so far. View entries by krapp.

Your email is safe with us.

Type and press Enter to search